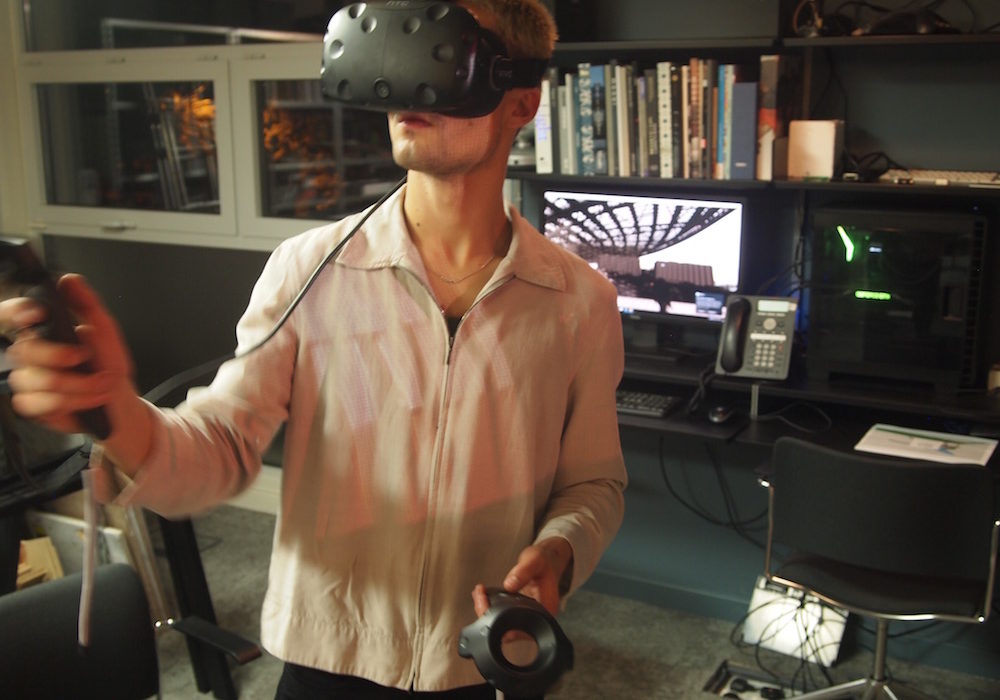 We heard from Andy Watts who is part of the Design Technology team at Grimshaw Architects in London.

Andy explained VR has been in use within Grimshaw for some time now. Recent improvements for VR integration within their main CAD tools has allowed further use and experimentation. Traditionally spherical renders had been created at the end of a design phase, VR is being utilised and actively explored in order to change this, aiding and informing the design process earlier and satisfying curious questions such as “What is around that corner?”

Following availability of the HTC Vive and then certain plugins which integrated with Rhino and Revit, the two standard tools at Grimshaw, these ideas of earlier Visual experiences became more of a deliverable reality.  From there considerations on how they wanted to integrate this into the practice. Is this a specialist task for a select few as an R&D project for select projects or introduce the entire office to VR starting at a very basic level so that it becomes the everyday norm?

At the time Grimshaw selected the Vive ultimately due to the improved User Interface, intuitive controllers (this was before the Oculus Rift had its controllers) and due to feedback related to Motion Sickness.

On software, Prospect and Unreal were tested but due to workflow restrictions at the time involving exporting, applying materials, lighting which all felt like duplicate effort they continued looking at other options. This lead to Enscape which was able to provide improved visual fidelity with much greater control of the lighting. It was available for Revit with the Rhino version which is coming out soon, Andy explained that the ultimate standalone executable worked well as no client then needed the CAD tool itself. At this point they re-visited Prospect and saw that actually there were two great solutions both with differing appeal:

Prospect –  In office use for everyday reviews.  Users can quickly observe scale, the space, see how certain spaces are interacting with one another, export screenshots, annotate etc.

Within the practise they decided on an open solution with VR accessible to all design teams and not through any “specialist” CGI team, this approach has worked out really well for them.

Physical location for the VR setup was explored, something permanent for the sensors to avoid re-calibration issues was required, so Grimshaw arranged for a single dedicated space and then added sensors to two other meeting rooms so the VR computer can be moved into those spaces for quick and flexible setup.

They are now finding that dramatic (and time consuming) design changes are far less likely to happen, with the implementation of VR, teams and potentially clients are more informed and involved in each stage with far more collective grasp on design change implications, all creating a greater level of team satisfaction at the end of each stage. 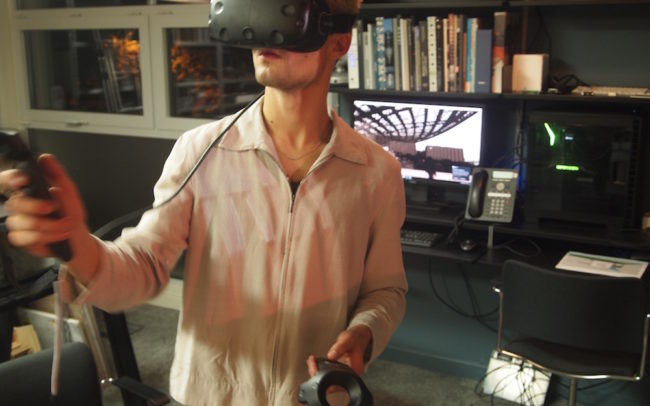 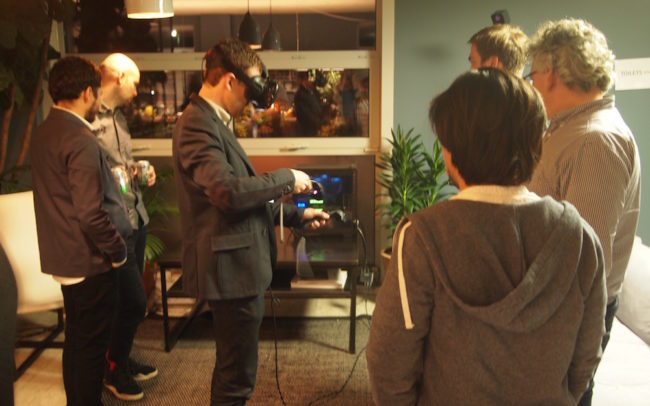 How has VR adoption changed office behaviour at Grimshaw?
As it’s been such a natural fit they’re seeing increasing impromptu use. Teams are just going ahead using the Vive, because it’s there accessible to everyone (following the initial supervision) they’re very comfortable doing this, all this in turn leads to much faster design iterations.  Design Review meetings happen more often than pre VR and lead to faster decision making all with greater team involvement.

Andy commented “Having VR in-house, yes, initially it’s seen as a fancy new tool which everybody is quite excited to get their hands on. But due to that willingness to explore and experiment we then saw an increase in client visits to the office, all very much a positive development.”

Following a client presentation in Dubai where the London VR rig was shipped the client shortly then purchased their own setup meaning file exchange and project discussion all happening dramatically faster and all with greater clarity.

All this has led to unexpected opportunities too with Grimshaw seeing VR become part of the project deliverable where one client invested in a VR cave and then said, “can you now design us an experience to go in to that new facility”

So, how does Andy and Grimshaw see themselves contributing to VR / AR development?

Andy then took some questions, they included:

How do you imagine these tools integrating with Grasshopper?

“The way I would envisage it is something along the lines of the plug-in Human UI.  There’s a way you essentially can build an interface that controls certain parts by definition.  Having something like that accessible within the VR experience is how I would see that happening.  Obviously it wouldn’t be the most intuitive thing to be controlling your graph in VR, it’s just not the right application.  But if you had an interface where you’ve got a set number of parameters that you can change, so storey height for instance or things like that… if you had that control, that would help the interface.”

I was just curious on how the rest of the office took the implementation of VR?

“It was slow to start with.  It required a lot of PR from us.  So, we did all office presentations and we made them aware that we have now got this technology in-house, and had a series of open sessions where anyone could come and have a go.  We’d invite them to come along, either they can bring a Rhino model of their own or Revit in some instances and actually start to work around that.  We found that by applying it to their own design and their own project work that they were looking at every day, they were the people that got most excited about it, and they were the first ones to come back and say, actually I’m going to bring back my project team and they’re all going to have a look.  So, based on that, it was about a six month process from our initial explorations with the Vive, to getting to a point where teams were using it regularly.”

We enjoyed a great first meeting and thanks to Oliver Salway and his team at SOFTROOM for hosting it.

The next VR/AR UGM is scheduled for February the 22nd at Heatherwick Studio.