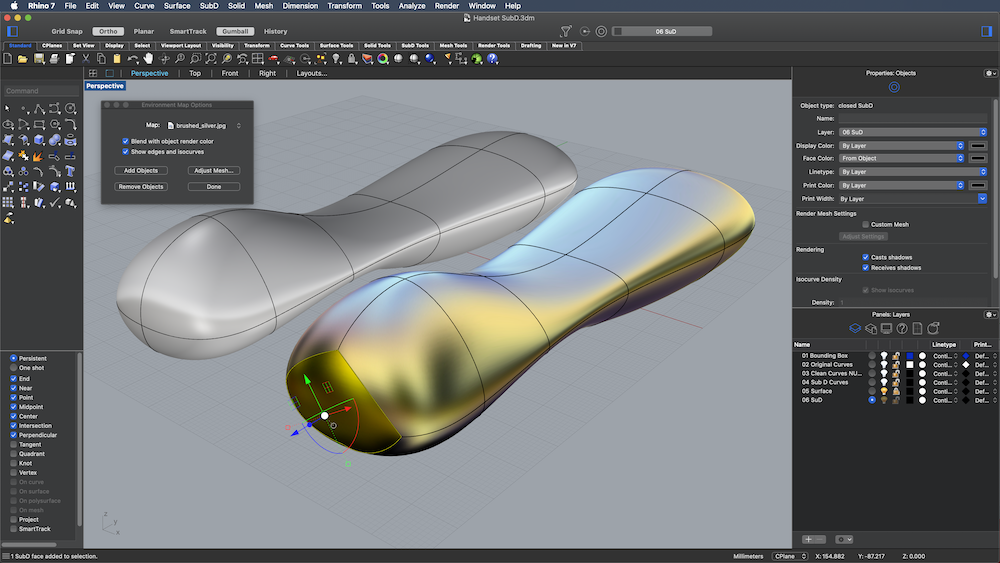 Rhino 7 is the most significant version upgrade for Rhino 3D in its history. There are many new features, including SubD tools (previously only available to users of the now defunct plugin T-Splines or otherwise in applications like 3ds Max, Maya, Blender and ZBrush), Rhino.Inside.Revit (run Rhino and Grasshopper within the BIM modeller Revit®), QuadRemesh (quickly create a quad mesh from NURBS geometry or meshes), new Rhino 7 Presentation tools and much, much more.

This Rhino 3D v7 video takes a look at the new SubD modelling metaphor in Rhino v7. This is shown using Rhino for Mac but is equally relevant to Rhino for Windows.

Phil Cook from Simply Rhino looks at three areas where a SubD workflow could have advantages over NURBS, these are:

Watch this Rhino 7 SubD Video here (if you’d like to follow the video transcript then you’ll find it at the foot of this page):

If you would like to watch a longer video that introduces SubD then you can watch our ‘An Introduction to SubD in Rhino v7’.

Other shorter videos looking at new Rhino v7 features are:

Hi, I’m Phil from Simply Rhino and in this video, I’m going to take a look at one of the most noteworthy new features in Rhino 7 – and that, of course, is SubD Modelling.

I’m going to look at three key areas where a SubD workflow could be preferable to NURBS.

Secondly, I’ll look at using the advantages of SubD to circumnavigate some of the unavoidable topology issues that occur in NURBS modelling. Whilst I’m looking at this, I’ll also show that SubD isn’t just about approximation – as Rhino SubD’s are spline based and have a set of specific commands just like their NURBS counterparts.

I’m going to be using a Mac for this video, but the processes are, of course, also applicable to Windows.

If you’re looking for a more in-depth video introduction to SubD in Rhino v7, what it is and why we need it, then I’d suggest looking at the video linked.

The first example I’d like to take a look at is this table design. This is modelled as a conventional NURBS polysurface and one of the areas where we may have an advantage with SubD is in creating variations of this transition between the underside of the table and the table leg. In the NURBS model anything that changes either of these two trimmed edges at the end of the transition may involve quite a bit of work in managing the continuity of the surface between those edges.

In SubD we don’t have the problem of managing continuity because the whole of this table is modelled as one continuous SubD surface. That surface is roughly analogous to a Degree Three NURBS service in that it is curvature continuous although we can of course add creases to edges to give this definition that we see here across the top of the table.

I’m going to use tool here which is roughly analogous to Blend Surface in our NURBS tools and I’m going to remove a SubD face and create a blend between the two open edges. Now, it may be helpful to use the boxy mode here – which I can enable using the tab key – and I should point out that you need to have the same number of edges on both of the two openings that we’re blending between.

Here, I can add segmentation into the blend to tighten it up and I can also play with the straightness of the Bridge or the Blend here once the Blend is complete and I have some nice tools that allow me to move edges – for example ‘Slide Edge’ which allows me to move -in this case- an edge upwards and downwards to play with the shape of the blend, or I can use the same tool on just part of this edge and slide this edge along to give me in this case a slightly more eccentric blend.

So, that’s the way in which we can create a blend which is roughly analogous to Blend Surface – where we’re blending across a gap – but now I want to have a look at what we can do where we have a hard edge. So this is an edge on the SubD here where I’ve created a crease and we’ve got effectively a cap on the bottom of that edge and in NURBS I guess here the tool we’d be using is ‘Fillet Edge’ and in SubD we have a tool called ‘Bevel’ so I’ll pick ‘Bevel’ from the SubD Tools and again I’ll select this edge – and zoom out a little bit here so we can see what’s going on – and ‘Enter’ and you’ll see that I can give this a number of segments and I can push and pull this Bevel and play with the shape of the Bevel. So this is really nice quick tool for taking, for example, the hard edge and softening that slightly.

Now, finally all that remains for me to do is to close up the hole in the underside of the table – so I’ll just select all of that edge and go to my SubD Tools and select the ‘Fill Hole’ command and I’ll use a single face to close that up and the result is a single closed SubD surface.

Next, I’d like to look at the idea that SubD surfaces aren’t just about approximation and indeed we can create controlled SubD surfaces from some defined curves by using surface commands just like we can in NURBS. The shape that I have on screen originates from our Simply Rhino Level Two class and here this is defined as a single NURBS surface. This is created from a number of curves that all have the same number of control points and whose control points are aligned along an axis and, in that way, we can create a surface that has a regular rectangular topology. Now, although this service is built correctly, a consequence of the way that it is built is that we have a singularity on each end of the surface. Of course, if we model this as a SubD then we could avoid that singularity by virtue of the fact that we can close this surface off with a single SubD face.

One of the things that’s interesting is that just like NURBS, SubD surfaces describe a different shape when they are open to that when they are closed. Now, if I was to select the faces on each end of this form and remove them then you’ll see that whilst the centre of the shape stays the same but the way in which the ends are defined differs quite a lot. Now, this relationship between the open and the closed SubD is fairly easy to predict and to this end what I can do here is to start by laying out some curves with which I can define an open surface; I can then close that surface to give us the result that I want. Here, for example, what I can do is go to my SubD menu and use ‘Sweep 2 Rails’ and I can pick these two Closed curves as the rails and then I can pick the four Open curves as the cross sections. I’ll see a preview here very similar to the NURBS preview where we can match the number of segments to those of the curves – so that we can get, if you like, an explicit number of segments into the surface – then, I can take the end and I can go to my SubD tools and I can close off the end with a Single Face at each end. Now, all I need to do is to pick these ends and go back to a reference and adjust the shape slightly just by pulling out the faces – so you can see that we have a fairly controllable way of creating a SubD alternative to my original NURBS form.

Another couple of useful things here, are that first of all this shape is symmetrical about the Y axis so I can pick the SubD and I can apply a Reflection I can choose the Y axis and I can pick a point on the side of the object that I want to keep and now you will see that half of my object is a darker grey – that’s the reflected side – and what this now means is that if I, for example, pick an edge here and pull this edge to change the shape then I’m going to have a symmetry on the reflected side. Another significant change since we created our first SubD video when Rhino 7 was in ‘Work in Progress’ is the way in which the NURBS conversion is handled so if I pick this object and I use the ‘Convert to NURBS’ button here you’ll see that I have some SubD options and not only can I control how the extraordinary vertices are handled but I can choose to have either ‘Unpacked’ or ‘Packed’ NURBS surfaces. When I choose ‘Packed’ I’ll have less NURBS surfaces making up the polysurface than I would do with the ‘Unpacked’ option. If I turn off the Iscocurve display here then you’ll see that now rather than having eight NURBS patches in this middle section it’s now built from one single surface and this is much friendlier for downstream editing in NURBS.

The next new SubD tool I’d like to take a quick look at is called ‘MultiPipe’ – this is a great tool when you have either a number of lines or a number of curves that share coincident endpoints – and you can quickly pipe these and create these smooth transitions at the pipe junctions. So, let’s just take a look at how this works; so I’ll turn off my existing example and I’ll just pull back a little bit on the view here and let’s select these lines and then I’ll go to my SubD tools and pick ‘MultiPipe. I’ll define a Radius, choose whether the ends of the Pipe are Capped or not and I’ll choose a number of ‘Strut Divisions’. These ‘Struts’ are the segments between the endpoints of the curves so, for example, here you can see that there are two segments and if I undo the command and run it again and this time I include more ‘Struts’ or segments you’ll see that we get a longer portion of straightness and a sharper corner. Again, if I redo this and set this to 0 then I’ll have a really smooth transition. Once you’ve created the Multipipe then of course it’s fairly easy to add and remove segmentation and play with these shapes and maybe remove some edges to get a better topology. Here, for example, you can see that I’ve added a little bit of sharpening to the inside of the frame and to the inside of this chain stay.

So, that’s about the end of what I wanted to cover in this video. Thanks for watching, and please feel free to leave any comments below. If you’ve found this video useful then please hit the ‘like’ button and, remember that to keep up with the latest developments in Rhino then you can subscribe to this channel. At Simply Rhino we offer training for Rhino and all its key plug-ins – so check out our Rhino website for more details.

Thanks again for watching and I’ll catch up with you in the next video.