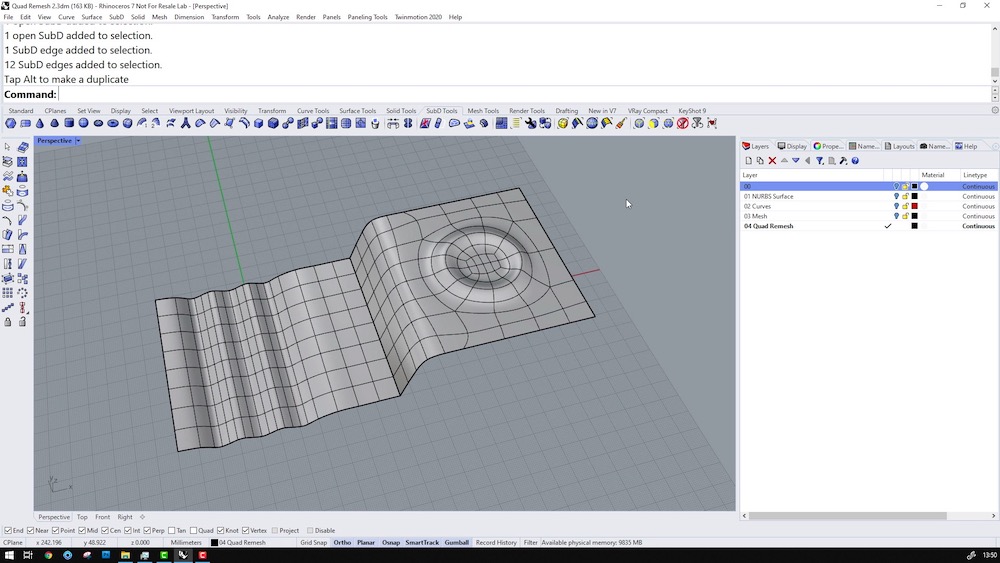 Rhino 7 is the most significant version upgrade for Rhino 3D in its history. There are many new features, including SubD tools (previously only available to users of the now defunct plugin T-Splines or otherwise in applications like 3ds Max, Maya, Blender and ZBrush), Rhino.Inside.Revit (run Rhino and Grasshopper within the BIM modeller Revit®), QuadRemesh (quickly create a quad mesh from NURBS geometry or meshes), new Rhino 7 Presentation tools and much, much more.

Watch this Rhino 7 QuadRemesh Video here (if you’d like to follow the video transcript then you’ll find it at the foot of this page):

If you would like to take a longer look at QuadRemesh then watch our ‘An Introduction to QuadRemesh in Rhino 3D‘.

Other shorter videos looking at new Rhino v7 features are:

Hi I’m Phil from Simply Rhino and in this quick video I’m going to be taking a look at another new feature in Rhino 7 – QuadRemesh.

If you’re looking for a more in-depth examination of QuadRemesh in Rhino v7 then checkout the more substantial video which is linked.

QuadRemesh is great for reverse engineering and mesh retopology and this command sits inside both the Mesh tools and a SubD tools and, as we’ll see shortly, it has a fairly close relationship with SubD.

Here I have a single NURBS surface which has a little bit of curvature detailing here and a sharp crease here and, ordinarily, if I mesh this using the standard Mesh tool in Rhino, I’m going to end up with a fairly dense mesh like this – and the mesh is a mixture of Quad Meshes and Tri Meshes. QuadRemesh, however, gives us a new way of meshing. I’m going to run the tool and pick the surface that I want to mesh, and I can then calculate the result either based on the ‘Target Edge Length’ or the number of quads that I want to use so I’ll start with ‘Target Edge Length’ and ‘Preview’ and hide the input object so we can better see the QuadRemesh result. Now you’ll see we have a number of settings here and I’ll first turn on ‘Detect Hard Edges’ and this will keep the crease in here.

When we use ‘Target Edge Length’ all our quads are going to be pretty much the same size, whereas if we switch to ‘Target Quad Count’ there is an amount of adaption in this which lets us have smaller Quads where there is more curvature or detail in the surface. I can increase the amount of adaption by using the percentage slider here and now you’ll see that I have bigger faces here where I have less detail and smaller faces here where I have more detail. I’ll set that back to 50 and I’ll turn on ‘Adaptive Quad Count’ – what this setting will do is to throw more Quads at the areas of more detail, and this will usually give us a higher Quad Count than we specify.

As well as creating a Mesh I can create a SubD – now this SubD is, of course, smooth by nature but I can make this crease aware and I can create corner conditions on the SubD. I can also choose to interpolate the SubD rather than by creating it by its vertex points and this will make the QuadRemesh SubD fit closer to our target surface.

One of the things I can do is to change the topology locally by using some curves so I’m going to turn on these curves here and I’m going to pick ‘Select Curves’ in the dialogue and choose these three curves and Enter. Then I’m going to change the ‘Curve Influence’ to ‘Edge Ring’ and I’m also going to invoke a Symmetry along the X axis here and you’ll see that now my topology is equalised about the X axis and we’ve created an area of topology with this circular detail to it.

So, I’ll accept that result and I’ll just push that SubD onto another layer here. What I want to do now is to turn on the ‘Gumball’ and pick this middle circular edge and just pull this up a little bit; now if you look at this with a reflective view mode, you’ll see how this topology change allows for an easy shape change.

One of the areas where QuadRemesh can be very useful is in reverse engineering. Here we have a fairly typical laser scan and this one is from a ‘Polyga’ scanner and this is producing a mesh with four and a half million faces. This is quite a dense mesh and certainly not something we’d want to work with directly, so let’s have a look at trying to make some sense of this with QuadRemesh.

I’m going to start with the settings at somewhere close to default so a ‘Quad Count’ of 2000, ‘Adaptive Size’ of 50% and ‘Adaptive Quad Count’ turned ‘On’. I’ll also ‘Convert to SubD’ by Interpolation, keeping SubD Creases ‘On’ – I’ll preview the results of this and now you can see that the result is pretty good – without too much effort – and that the topology of the mesh works out and traces the shape very well. Indeed, the mesh is created based on principle curvature so you can be confident that much of the time the topology is going to be empathetic with the shape. There’s a bit of a problematic area here but it’s certainly much better than we had to start with, so I’ll accept the result.

You can see that we have some holes where the original scan data was open but this is now something that’s going to be much easier to fix going forward. We can probably keep this as a SubD and simplify some of the areas before converting to a NURBS Polysurface and redoing some of the circular hole and threaded features.

Another area where QuadRemesh could be very useful is in re-topologising terrain. Here, we have quite a dense terrain mesh which is rather unwieldy and we can produce a nice smooth QuadRemesh result and perhaps turn this into a SubD so that, for example, we could do some local landscaping. So that’s about the end of what I wanted to cover in this video. Thanks for watching and please feel free to leave any comments below. If you found this video useful, then please hit the ‘like’ button and, remember that to keep up with the latest developments in Rhino then you can subscribe to this channel.  At Simply Rhino we offer training for Rhino and all it’s key plug-ins so checkout our Rhino UK website for more details. Thanks again for watching and I’ll catch up with you in the next video.